Just like students in peril from Lego Harry Potter and citizens in peril from Lego Batman 2, Stan Lee in peril is a side activity in which you must save someone who is in trouble. In this case, it's Stan Lee, who-along with other people such as Jack Kirby-created The Fantastic Four, Spiderman, and almost all other well-known Marvel characters.

To save Stan from whatever danger he somehow got himself into, you just need to find where he is and use your powers to save him.

This guide will tell (and show) you where to find Stan Lee in each situation and what to do.

Saving Stan from each peril will require you to use a variety of characters that have certain abilities. If you complete the main story, you should be set on most of them and know how they all work*, although there are still some abilities that you will need:

Magnetism: Used to manipulate metal which is used for multiple perils. Can be acquired by purchasing Magneto for 150,000 studs after completing the story mission Magnetic Personality (or by unlocking Polaris).

Sand Manipulation: Used for sand pits that are required for some perils. Can be acquired by purchasing Sandman for 175,000 studs after completing the story mission Sand Central Station (or by unlocking Sandman goon).

Also, while this character isn't required, Super-Skrull is very useful for completing these perils (especially the ones in the Manhattan hub) since he can fly and has all of the Fantastic Four's abilties** (on a side note, if you complete story mode and purchase a magnetic and sand character, you should buy a symbiote character such as Venom or Carnage, so that you have every ability in the game).

*Except for building cosmic bricks, which Galactus can do (you'll unlock him when you beat the final level)
**Excluding the ability to use Mr. Fantastic pads

When you get inside Central Station, jump up to the left side. Destroy the mail box that's on Stan to free him.

On the third section of the level (after the cutscene in the Daily Bugle), head forward and get onto the rooftop with the water tower. Destroy the silver pipes and use telekinesis to free Stan from the water tower.

In the long hallway near the end of the level (right before the part when Venom does the jump-scare), there are four blue pods. Use magnetism to remove the blue panel to the left, then activate the claw switch that appears. It'll open the pods and save Stan.

To the very left of the security gates in the first section is a Mr. Fantastic grate. Go through it, then use your super sense to reveal two pull hooks which will save Stan once pulled.

At the start of the second room, you'll find Stan hanging on to the wall. Use the small sand area below him as Sandman to transform into a trampoline so he can jump down to safety.

When you arrive in the big room where you first see Red Skull, fly up to the left and you'll see Stan being electrocuted. Destroy the generator objects next to him to save him.

As soon as you finish the flying sequence at the start of the level, head up and you'll see Stan stuck under a silver object. Destroy it to free him.

In the second section of the castle when you have to save Nick Fury and the Human Torch, head all the way to the right and you'll see Stan in a cannon. Use super sense and pull the handle. Then melt the gold fuse to shoot Stan out of the cannon which lands him to safety.

When you start the level, head up to the area where you have to climb a wall and move a pipe via pull handles. You'll see Stan trapped under metal to the right, so use magnetism on the metal to save him.

In the second section of the level is a rotating object that you must walk across. To the right of it near the back of the room is a small platform that can be accessed either by flying or by climbing on a small rope. Stan is on the platform and trapped under a small piece of lego. Destroy it save Stan.

In the second section, Stan is trapped behind fire near the end of the broken plane. Put them out to save him.

In the room where you have to rotate a giant tube to reach Magneto is a silver ceiling that can be destroyed. Destroy it and Stan will fall down to safety.

In the last room where you fight Doctor Doom is a claw switch towards the bottom-right side. Use it and then build the pieces that appear to create a control panel. Use the control panel to beam Stan from out of space.

When you're team four (the last group that builds the giant Earth "cake"), head all the way up towards Galactus and you'll see Stan stuck in a jet. Use the Sandman pit next to it to free him.

How to unlock: Complete story mode
To the right side of the area you'll see Stan stuck behind gold bars. Melt them to free him.

How to unlock: Unlocked by default
When the safe opens, you'll see Stan trapped in a cage. Use magnetism to free him.

How to unlock: Have 10 gold bricks
Simply dig where Stan is at the right side of the room.

How to unlock: Have 20 gold bricks
Use magnetism on the bar at the back of the room to open the door and save Stan.

How to unlock: Have 50 gold bricks
Put out the fireplace to the right using Loki/Iceman's ice power and Stan will fall out.

How to unlock: Have 75 gold bricks
Stan is stuck under a bar bell towards the right side of the room. Use magnetism to free him.

How to unlock: Have 100 gold bricks
Use super sense at the right side of the area to reveal two hooks. Pull them and then melt through the gold wall that appears. Build the bricks that fall out into a hat and then shake it using telekinesis to make Stan fall out.

How to unlock: Have 125 gold bricks
When you fight Lizard he'll eventually go into the greenhouse to the left. In it, you'll see Stan stuck in a plant's mouth. Dig next to the plant and build the pieces from it into a Mr. Fantastic pad, which can be used to free Stan.

How to unlock: Have 150 gold bricks
When Doormammu leaves the bathroom, use super sense to reveal two hooks. Pull them and fly up into the room, then destroy the silver lock on the coffin in the corner to free Stan.

How to unlock: Have 175 gold bricks
Charge the lightning switch towards the left side of the jail to free Stan.

Map below was made from scratch using screenshots of sections of the map since I couldn't find a full blank version of the map, so sorry if it isn't the greatest (also I made it a seperate link instead of posting it here so you won't have to keep scrolling up). Map also corresponds with the numbers below.

After you complete Bifrosty Reception, you'll be at the X-Mansion. Use mind control on Stan as Jean Grey and build the lego pieces. Then use telekinesis on the valve so that the sprinklers will turn on and save him (this is required for story).

Stan is trying to get inside of Marvel Comics H.Q. Use mind control on the guard and pull the switch so he can go in.

Stan is stuck under chess pieces. Use super sense near the chess pieces and pull the hook to save him.

Stan will drink from a vending machine and turn into Stan Hulk. Fight him and he'll turn back to normal (which counts as helping him).

Stan is hanging onto a wild hose. Melt the claw switch, then use it to stop the hose and save Stan.

Stan is standing under a crane and is going to be crushed by the load it has. Go to the cockpit and use the claw switch to save him.

Stan is being held by a gorilla on the Empire State Building. Hit it to free him.

Stan is being grabbed by a floating robot on the Helicarrier. Shoot it to free him.

Stan is stuck in the ground in the animal section next to the circus in Central Park. Dig him out, though be careful of the Sandman goons that will attack you.

Stan is stuck at the top of a chimney in the Industrial Disctrict. Break the giant cracked wall near the bottom of the chimney to save him.

Stan is stuck in the pond in Central Park. Use magnetism on the life preserver to save him.

Stan is stuck in a taxi that's up a small tree near the Financial District. Destroy the tree to save him.

Stan is being crushed by a giant weight near Fogwell's Gym. Lift it with a strong character to save him.

Stan is stuck to a train track. Use magnetism to free him.

Stan is on a boat surrounded by sharks. Kill them to save him.

Stan is behind a cracked wall at the Raft. Break it to free him.

Stan is surrounded by flames near the X-Mansion. Clear them to save him.

Stan is stuck in a clown car in the animal section of Central Park. Pull the hook to free him.

Stan has his head stuck in a mailbox in the Financial District. Break the mailbox to free him.

Stan is surrounded by flames on the torch of the Statue of Liberty. Put them out to save him.

Stan is getting beat up by Sandman goons. Defeat them to save him.

Stan is being electrocuted at the Roxxon Power Station. Pull the lever above him to save him.

Stan is hanging onto a balloon above the circus in Central Park. Shoot the balloon to save him.

If you followed this guide correctly, you should now have all of the perils completed, as well as the Stan-tastic achievement unlocked and Stan Lee as a playable character! He's one of the most useful and amusing characters to play as, so enjoy!

Hope you found this guide to be helpful.

I love making Steam guides to help the community. If you want to keep track of my guides, click here and select the follow option to the right! 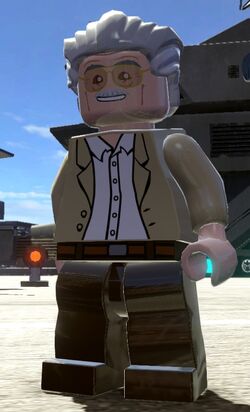 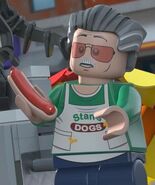