The playboy philanthropist Bruce Wayne and presidential candidate Lex Luthor are both nominated for the Man-of-the-Year award. The ceremony takes place in Gotham, and the award goes to Bruce. Five villains (The Joker, The Riddler, Harley Quinn, The Penguin, Two-Face) and their henchmen raid the event and begin stealing from the guests. Bruce exits stage-right and changes into his Batman costume. Joker takes the trophy and begins his "acceptance speech", but is interrupted by Batman and Robin crashing through the stage in the Batboat. Four of the villains exit through the trapdoor, leaving Harley Quinn to cover their flight. She is defeated, and the Dynamic Duo begins hunting the other villains in the theatre. Although they manage to capture The Riddler, Two-Face, and finally The Penguin, The Joker escapes.

Batman and Robin chase him in the Batwing and Robin's Helicopter, defeating him in Gotham Funland Entrance. After the police haul him off, Superman arrives to greet the Dynamic Duo, apologize to "Bruce" for missing the ceremony, and to scold Batman for making a mess at the theatre.

During the raid, Lex developed an admiration for The Joker, and the two form an alliance later when Lex breaks Joker out of Arkham. With The Deconstructor, they can destroy shiny, black objects (such as the walls of Penguin's cell), and Lex hints at using it on Batman's vehicles. While in Luthor's Mini-VTOL, Joker begins aiming the Deconstructor at different cells and frees Catwoman, The Riddler, Two-Face, Harley Quinn, Poison Ivy, and Bane.

Meanwhile, in the Batcave, Bruce Wayne is contacted by Martian Manhunter from the Justice League Watchtower, who informs Bruce of an emergency. Alfred shows Bruce and Dick Grayson (Tim Drake) where it is on a map. They change into Batman and Robin and leave for Arkham Asylum, where they find the villains Joker freed attempting a prison break. Starting with Catwoman, the villains are stopped, and the police arrive. Commissioner Gordon informs the Dynamic Duo that all of the villains have been accounted for, except Joker. Batman notices an electrified brick outside of Joker's cell. He and Robin go to investigate. They run into Killer Croc and Mr. Freeze, who create obstacles, and also stop The Scarecrow from escaping. They bring a black piece back to the Batmobile and discover it was destroyed with LexCorp technology and conclude that Luthor broke Joker out. Batman, Robin, and Gordon are alerted by a Police Officer that there has been a break-in at Ace Chemicals, and they leave. When Gordon and the Officer look back, they realize that the villains have escaped and that other officers are tied up in their places. Two-Face and Riddler wave at them as they flee in a police van.

At Ace Chemicals, Batman and Robin find that The Joker has already been there and stolen chemicals. They try to escape when a fire begins. Just before they fall into the inferno, they are rescued by Superman. With help from Superman, they leave. Batman tries to find out what Joker is making, realizing it is Kryptonite. He uses the Batcomputer to find nearby locations of Kryptonite and heads Downtown. They follow a large vehicle, the Juggernaut. On the inside, Lex and Joker are creating Kryptonite. Batman and Robin begin firing at it. When the defenses are weakened enough, the Dynamic Duo infiltrates it. Batman takes the Kryptonite, and Lex is subdued. Joker, however, uses his joybuzzer on Batman and Robin to the point where they fall out of the Juggernaut, into their vehicles. Joker aims the Deconstructor at the Batmobile, which falls apart, and the Juggernaut gets away.

Back in the Batcave, Batman analyzes the Kryptonite and finds that it is only similar to true Kryptonite, and is harmless to Kryptonians. However, if there wasn't actual Kryptonite in the Juggernaut, the Batmobile's computer shouldn't have shown it. He and Robin decide that it was just a trick of Joker's, and put it away with the other Kryptonite they have stored should Superman go evil one day.

Meanwhile in the Juggernaut, Lex and Joker, tracking the location of the false Kryptonite, lose their signal, but then realize that it is directly ahead. They use the Deconstructor to open a cavern and enter the Batcave. A fight ensues, and the Bat-bike, Batwing, and Batboat are destroyed. Batman and Robin flee through the elevator and hang on to the shaft when it falls. Joker and Lex find the Kryptonite vault and leave with it after Joker's pies explode and a fire begins. At the top of the elevator shaft, Superman arrives to rescue Batman and Robin. Together they escape the Batcave. Batman and Superman head after a LexCorp aircraft while Robin stays and tries to fix the vehicles.

Batman and Superman infiltrate the LexCorp aircraft, but when they reach the control section, Batman is dropped through a trapdoor. Superman rescues him and carries him to LexCorp in Metropolis. From LexCorp, a large Joker-esque Robot appears and heads back to Gotham. Batman (in a LexCorp aircraft) and Superman fire at it, then land on it. Lex emerges with Kryptonite and weakens Superman, who falls. Batman saves him by gliding back to Gotham. Though most of his powers return, Superman is unable to fly and is hunched over.

The Robot hits at them, and they fall through the ground. It continues to make holes in the terrain above the metro, but Superman uses his heat vision to obliterate its left hand.

At the City Hall, Lex begins to give a speech and infects the crowd with a mind-altering gas so that they will vote for him. Superman destroys the gas emitting flower from the Robot.

Robin arrives in a multi-colored Batmobile. The Robot chases Batman and Robin through Gotham City. However, they drive so that the Kryptonite it leaves looks similar to Joker's face. Martian Manhunter sees this from space, calling the Justice League. Wonder Woman, Green Lantern, Cyborg, and The Flash respond.

The Robot attacks Wayne Tower, since Lex despises Bruce, and destroys the foundation. Superman and Wonder Woman keep it in place while Batman, Robin, Green Lantern, and Cyborg enter through the building together. They knock the Robot off of the top, then jump down to conquer the automaton. Green Lantern creates constructs to keep the tower from falling.

Superman is too weak to continue, but Batman, Robin, Wonder Woman, Green Lantern, Cyborg, and The Flash finish the Robot off. Joker attempts to use his joybuzzer to defeat the heroes and calls upon several of Lex Luthor's Lex Bots to attack them. However, the robots are defeated, and Joker soon afterward. The heroes begin to celebrate the defeat of Joker, when suddenly Lex rises out of the destroyed Robot in his Power Armor Mech, attempting to kill the Justice League. Lex fires the machine's gun at Batman, who quickly hides and contacts Martian Manhunter for help. Manhunter then readies the Watch Tower laser and, with the aid of the heroes, fires it upon Lex's Power Armor, causing it to fall to the ground with Lex trapped inside. Batman then delivers the finishing attacks to the Power Armor Mech and forces Lex down, defeating him.

The police then arrive, arrest Lex and the Joker, and haul them off to prison. The other superheroes stay to help clean up the Batcave.

Meanwhile, Brainiac is viewing Earth, declaring: "I have located it."

Though not a part of the main story, there are side-missions around Gotham City where the player rescues endangered civilians and locates/defeats hidden villains, such as Bane on the beach or The Penguin in Arctic World.

Summer 2012: Batman is back to save Gotham City and the action will only build from here!

The Highly-Anticipated Sequel to the Best-Selling LEGO® Videogame of All Time Returns with Help from Super Heroes including Superman, Wonder Woman and Green Lantern.

In LEGO Batman™ 2: DC Super Heroes, the Dynamic Duo of Batman and Robin join other famous super heroes from the DC Universe including Superman, Wonder Woman and Green Lantern to save Gotham City from destruction at the hands of the notorious villains Lex Luthor and the Joker. Batman fans of all ages will enjoy a new and original story filled with classic LEGO videogame action and humor as players fight to put the villains back behind bars.

LEGO Batman 2: DC Super Heroes allows players to explore all new areas of Gotham City utilizing a variety of vehicles including the Batmobile and Batwing. In addition, they’ll be able to fight for justice by mastering new gadgets and suits, such as Batman’s Power Suit and Robins’’Hazard Cannon, and using all-new abilities including flight, super-breath and heat vision.

LEGO® Batman™ 2: DC Super Heroes is being developed by TT Games and will be published by Warner Bros. Interactive Entertainment.

Batman and Robin return in LEGO® Batman™ 2: DC Super Heroes, the highly-anticipated sequel to LEGO Batman™: The Videogame, the best-selling LEGO videogame of all time, which has sold more than 11 million units worldwide.

This time the Dynamic Duo join forces with other famous DC super heroes including Superman, Wonder Woman and Green Lantern to stop the notorious villains Lex Luthor and The Joker from destroying Gotham City. Batman fans of all ages will enjoy a new and original story filled with classic LEGO videogame action and humor as players fight to put the bad guys back behind bars. 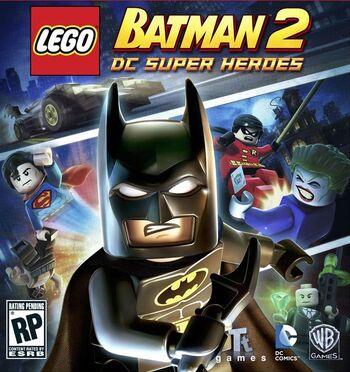 LEGO Batman 2: DC Superheroes is the sequel to the highly praised LEGO Batman: The Videogame. The 1st promotional image was leaked on November 28, 2011, and was later confirmed. The game features other characters from the DC Universe, such as Superman, Wonder Woman, and Lex Luthor.

The Mac version of the game was released by Feral Interactive on September 6, 2012. A sequel called LEGO Batman 3: Beyond Gotham was released in November 2014.

In LEGO Batman 2: DC Super Heroes, the Dynamic Duo of Batman and Robin join other famous super heroes from the DC Universe including Superman, Wonder Woman and Green Lantern to save Gotham City from destruction at the hands of the notorious villains Lex Luthor and the Joker. Batman fans of all ages will enjoy a new and original story filled with classic LEGO videogame action and humor as players fight to put the villains back behind bars.


In the handheld versions, the order of bosses anf stages are different too:


In the handheld versions, each minikit unlocks a new character.

The game features dialogue, and is the first in the Traveller's Tales LEGO series to do so.